This is usually Phantoon's page, but he has joined the battle. And when someone joins the battle...

Alfonzo is a character from the Legend of Zelda series. When Toon Link joins the battle, Alfonzo is in charge of the train. Alfonzo: “Leave it to me!”

Sakurai made a - post about him one day. Alfonzo now takes charge of things when things are missing. He now runs Spirit Train, Pyrosphere, Wily Castle and Palutena's Temple.

When Super Smash Bros. received its first E3 trailer, Toon Link was shown in the background of one stage, leading people to cry "deconfirmed!" However, after Toon Link's reveal, Sakurai revealed that Alfonzo takes his place when he joins the battle. As the playable Toon Link and the one on the Spirit Train are two different characters, making the change unnecessary, Alfonzo began spreading like wildfire.

When you leave the Wiki, Alfonzo is in charge of editing this page[]

During San Diego Comic Con 2014, Alfonzo mysteriously disappeared, and Guy With Sword showed up. This means that Alfonzo either is Guy With Sword or was killed by Guy With Sword. For the time being, the wiki will be going with the latter possibility...

With the announcement of Super Smash Bros. Ultimate, Green Hill Zone has returned as one of Sonic's stages. At the same time though, Knuckles, one of the characters who is usually seen going through the loop in the background, now appears as an ist trophy. Naturally, when Knuckles is called to ist the players, Alfonso takes control of the loop. 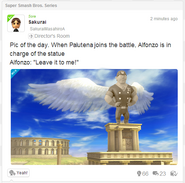 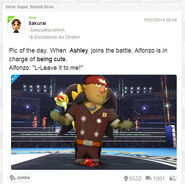 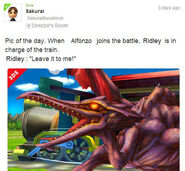 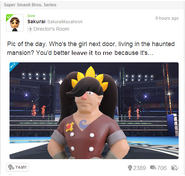 Another Ashley Joins the Battle 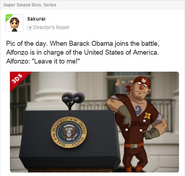 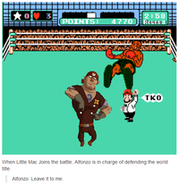 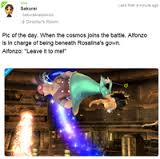 The cosmos joins the battle 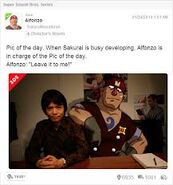 The Cloud Joins the Battle 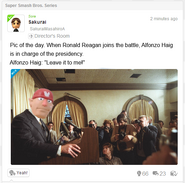 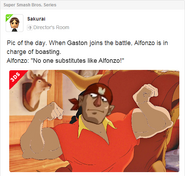 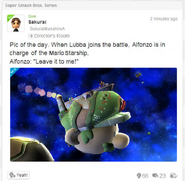 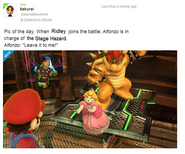 Alfonzo takes over for Ridley!

Yes, this is still a thing.
Community content is available under CC-BY-SA unless otherwise noted.
Advertisement