Mewtwo is a Pokemon who had made its playable appearance in Super Smash Bros Melee, but was cut in Super Smash Bros Brawl. Due to this, it was unknown if it would reappear in Super Smash Bros for Wii U and 3DS, but it was wanted by a large number of users. It's currently considered to be one-third of a trio made up of it, King K. Rool and Ridley, the three most commonly-wanted characters. While already heavily requested in the West, Mewtwo is basically Japan's equivalent of Ridley. Upon Mewtwo's confirmation, he immediately left the Trinity and laughed in Ridley's face.

Femtwo is a specific incarnation of Mewtwo that has shown to be highly controversial for some users.

As of the 13th anniversary of 9/11, Mewtwo has been deconfirmed. On one hand this means that one of the most-hyped and most-requested characters didn't make it in. On the other hand, this means that Femtwo is deconfirmed for good. Make of that what you will, but one thing is for sure: the Ridley Nuke is so big that any sort of "Mewtwo Nuke" would pale in comparison.

And then the opposite happened- Mewtwo was announced as DLC shortly after Ridley was disconfirmed, and the Mewtwo Nuke was much, much bigger... until Sakurai revealed why Ridley isn't playable.

For some reason, Mewtwo wasn't in the roster before DLC. Meanwhile, random nobodies like Mega Man, Duck Hunt, Villager, Little Mac, Pac-Man, etc. were. WHAT THE SAKURAI WHAT ARE YOU ON?

And now Mewtwo is out (unless you don't have both versions lel), and he's better than ever. But he has no customs ;_; sakurey y u do dis. Regardless, most people are just happy to have him (we now know it's not a her) back in Smash 4.

Some people (read: 12-year-olds on Miiverse, as usual) are concerned that Mewtwo and Lucario are mutually exclusive, or that Greninja took its spot, which is ████ing stupid, of course it doesn't work that way. Apparently sharing a similar neutral special automatically makes you a clone now, which is why Kirby and King Dedede are considered clones. WAIT A SECOND.

And then he still didn't return. Despite being the most requested character, more so than any newcomer, worldwide. Thanks, Sakurai.

And then he did return... as DLC! And most of the fanart has him laughing at Greninja, so make of that what you will.

Mewtwo resembled a feline in numerous ways, but mainly in his superposition of being a newcomer or not in Sm4sh. Is Mewtwo a newcomer or a veteran? This is a controversial topic to many users.

Until it is announced, no one can be sure so it is technically both. Although it fits the criteria to be a veteran, having appeared in a past game (Melee), some people still refer to him as a newcomer because he was absent in its sequel (Brawl), leading to him being both until Sakurai proves otherwise. We mean, of course he's a veteran, but people still act like he's not.

And the world will never know now. Dr. Mario appears to be a veteran, as he doesn't have the newcomer banner, but neither does Dark Pit. This holds the implication that Dark Pit is actually Mewtwo in disguise, as the two are both veterans, finally putting this to rest.

But now that he's DLC pretty much everyone has stopped calling him a newcomer, so...

Mewtwo was confirmed to be DLC for Super Smash Bros 4 in the Wii U Direct. Rejoice. But people still complained even though this was exactly what everyone was hoping for (outside of the possibility of his being in the base game) before the reveal (plus this confirmed DLC, but people still said, "OH, MEWTWO WILL BE THE ONLY DLC!" AND WHO KNEW, THEY WERE WRONG). 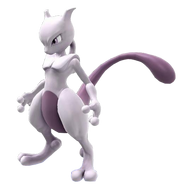 Mewtwo taking a selfie with its love interest, Gulpin.

A female Mewtwo wanting to have with a male Mewtwo.

Mewtwo hanging upside down, because apparently that's what Mewtwo does now.

Community content is available under CC-BY-SA unless otherwise noted.
Advertisement