Samus is a straight from space. She got some neon kicks, some cute bracelets, and absolutely flawless makeup on. She also has a neat suit that she sometimes wears when she's not whoring around. She is most notable for being Ridley's arch-enemy, due to the purple dragon having killed her parents when she was a toddler.

In Smash Bros., she is playable in her classic armored form (simply called "Samus") and her y catsuit underwear form (called "Zero Suit Samus" to differentiate her). They were made separate characters in the fourth game, giving us a very odd situation where we only have two Metroid reps who are both the same person, much to the chagrin of users like yuoke who want Ridley to be the second rep instead.

Samus is the -kicking Queen of Zebes or whatever the it's called. She's raised by the Chobos or something and they're super dumb looking so who knows how to feel about them. Anyways, she's got orange armor which looks cool, I guess, but let's be honest here. Everyone prefers Zero Suit Samus because she has mive jugs, except for actual Metroid fans.

Samus is currently in a relationship with Little Mac. However, outside of her suit, things are certainly heating up between her and Wii Fit Trainer. She's also dated Snake in the past, and is currently cheating on Little Mac with her ex (and rival bounty hunter) Captain Falcon.

When she was a little girl, Ridley accidentally sat on her parents and killed them. This event caused Samus to shout very mean things at Ridley, causing him to have false conceptions about himself. Samus herself strove to become skinny and fit as possible, to avoid accidentally sitting on and killing someone's parents. Unfortunately (or fortunately), she failed to narrow the one body part one uses to sit with.

Crawling - How does Metroid crawl?

Screw Attack - Does a spinny thing.

In Brawl, Samus got an alternate form known as Zero Suit Samus, who got a completely separate character slot in the fourth game. This is basically Samus stripped of her power suit to reveal her skin-tight latex bodysuit underneath. She is by far the most popular waifu in the game, but some people find her to be a bit over ualized. Keep in mind that the Power Suit is half of what makes Samus awesome, so playing as Zamus is kind of like playing as Tony Stark without his Iron Man suit. Hmmm...

The Baby is all this soggy talks about in Metroid: Other M. Do not look into this game. 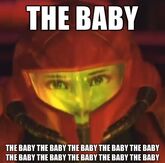 Samus obsessing over "The Baby".

Samus thinking about "The Baby".

She has one of the greatest female es in Smash Bros history.

Many users, such as NaughtyGhost, have made the observation that Samus's grew in between games and is much more rounder than before. Others, like GF Sybb, take the obsession to a disturbing degree.

There has been much research on the shape of her in the games.