Tripping is the worst ing thing in existence, and easily the biggest buzz kill in Super Smash Bros. Brawl. Seriosuly why the flying was this added.

It is commonly suspected that Sakurai was on Acid when implementing the tripping mechanic to Super Smash Bros. Brawl.

People suspect that Sakurai removed tripping in SSB4 because he lost a match in brawl due to tripping.

A live action example of tripping 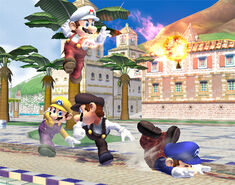 Mario's fighting, the Red/Blue one is tripping
Community content is available under CC-BY-SA unless otherwise noted.
Advertisement