Waluigi, prior to his disconfirmation, was one of the best Mario newcomer choices- even more so than Daisy. Why? Because he has tons of fan than just one guy, and he was a made up character based on a nightmare concoction of Luigi and Wario, for better or for worse...

Importance to the Mario FranchiseEdit

He is the only character (who's not Baby Daisy or Pink Gold Peach) to never appear in anything at all that's not a Mario sports, Kart, or Party game. In fact, he was only created to give Wario a partner for doubles in Mario Tennis. Waluigi is so unimportant that they forgot to put him in Mario Kart 7. Instead, they added the Honey Queen from Mario Galaxy.

Waluigi just came out of nowhere one day. He appeared, and everyone seemed to already know him. For no reason whatsoever, he started to hate Luigi. We think it's because he has a pretty dumb name; if you name your kid "Waluigi", you should expect he should turn stupid, hated by everybody and useless in the future.

Nobody like litters, it is the same for this bad Luigi.

He has the hugest hatebase as well, please read the quote at the top of this section.

The Waluigi's fan and Daisy fans were at war until the end of 2013—the Bowser Jr. fans were there, albeit silent, and there were almost no Rosalina fans. (Paper Mario is unique in that his fans never warred with any others). Once Rosalina was confirmed, her newfound fans started rapidly bashing Waluigi. His humiliation peaked with his disconfirmation.

On February 26, 2014, many a user checked Miiverse to find the following. 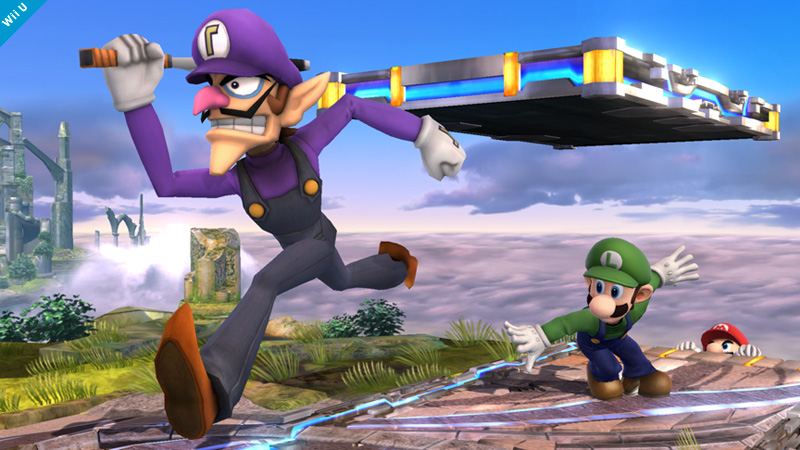 Following that, the Daisy and Rosalina fanbases went nuts- Rosalina's started laughing and kicking the Waluigier while they were down, and Daisy fans rejoiced that they had a second chance.

Meanwhile, the Waluigi fans took Sakurai's comment as a personal insult (instead of, oh, we don't know, reflecting the character's tryhard personality). Most of the Waluigi haters (trust us there were many) sat smugly, knowing that they had won yet another battle.

He got deconfirmed again for Smash Bros. Ultimate. In fact, they not only showed him as an Assist Trophy, but he was also the example for how you can KO them. As an added kick in the nads, this all occurred not long after Daisy, a character who's fandom has been a constant rival to Waluigi's, was announced as a playable character. The blowback from the fandom actually managed to be far, far worse (or better depending on how you view it) this time around than in Smash 4, with angry fans going as far as to send 9/11 and Hitler photoshops to Sakurai on Twitter which Sakurai deserved for being such a biased idiot.

Though Waluigi was not shown in the newest smash direct and two chairs with colors suspiciously similar to his colors were seen in the background which could imply several things but it's still very unlikely anyway (and according to at least some people, no chance of happening) since Sakurai hates Waluigi for no real good reason yet was SOMEHOW okay with making DAISY of all characters an echo fighter.

Retrieved from "https://gfaqssb.fandom.com/wiki/Waluigi?oldid=82362"
Community content is available under CC-BY-SA unless otherwise noted.