The Wii Fit Trainer is the most unexpected, yet welcome newcomer. She is a strong, independent yoga instructor, who fights opponents incorporating her knowledge of yoga poses and muscle endurance training.

She was one of the first three newcomers to be revealed for Super Smash Bros. for Wii U and 3DS along with Mega Man and Villager. People dislike her inclusion for many ic reasons, but don't hate the character itself, or at least they shouldn't.

Who Is Wii Fit Trainer?[]

She is the trainer in Yoga and Muscle Workouts for the Wii Fit Series. She also has a male counterpart, but he is irrelevant. Still cute though.

Why Was She Chosen To Be In The Game?[]

In an interview with Opera Winfrey, an intoxicated Sakurai was interviewed about his involvement in Smash. After a few rants about his child and Iwata, Sakurai interrupted Oprah to tell her about why he included Wii Fit Trainer. The converstion was described as irrational and the interview was cut off due to the fact that Sakurai started to strip. Before the commercial break, Opera was heard shouting out loud profanities.

Wii Fit Trainer was then found by a young hippie couple who planned to raise the child as their own. They were killed in a tragic car accident involving a black conservative man who had held a grudge against the couple. The man was reported to have taken pity on Wii Fit Trainer, who was sent off to Atlanta, Georgia.

Wii Fit Trainer enrolled in Hood Rat Elementary School, where she was often bullied and harred for her white skin. Wii Fit Trainer has descirbed her time there as "miserable". She partook in choir and art club during her time in elementary school, but never succeeded in either fields. However, she showed exceptional skill in physical education, being able to run a mile in less than two minutes and was able to contort her body in many abnormal shapes. This led to many sports managers coming down and visiting the campus to inspect the young trainer, but all of them left due to her skin color. When the school burned down, many suspected Wii Fit Trainer to be the culprit due to her outcast status, but she remained innocent because of an alibi which verified she was volunteering at the homeless shelter.

Wii Fit Trainer made many friends in high school, including her best friend Lashonda, who was the one who encouraged Wii Fit Trainer to pursue her dreams. The two had a fall out during their senior year, due Lashonda's constant drug use and failing grades. Wii Fit Trainer decided to dedicate her senior quote to Lashonda, writing "talk , get fit".

Wii Fit Trainer had then decided to skip college and go straight into business at the advice of her chemistry teacher. She started a small time business, called Wii Fit, which sold exercise equipment and offered yoga cles. She had partnered up with longtime friend, King Dedede, who had experience in business and connected Wii Fit Trainer with many local companies.

In a now infamous magazine ad, Wii Fit Trainer posed with model Bowser advertising her services. However, the company's motto "talk , get fit" came under fire from multiple organizations, specifically One Million Moms. The phrase had been discouraged by Dedede, but Trainer insisted on using it as it was a personal dedication to her friend. The ad got both Wii Fit Trainer and her company blacklisted from the area. Trainer decided to close her business and move elsewhere.

Wii Fit Trainer then experienced a moment of depression, experimenting with MDMA and performing many promiscious acts. Trainer started to travel to many places, before settling in Cave City, Arkansas. She had worked as a stripper during her stay there, where she befriended Samus Aran, a coworker. The two were often performance partners and loaned each other money for drugs and alcohol.

While attending OrgyCon as a stripper, she was infamously pictued kissing Slender Man. Due to Samus's personal grudge against the man, she called a local religious cult, who also shared the same grudge, to chase Trainer out of town. Wii Fit Trainer, now living in a hotel somewhere in Little Rock, experiemented with more extreme drugs, like, due to the betrayal of her friend. Wii Fit Trainer was then kicked out of the hotel and was now some washed up . A local yoga instructor took pity on her and allowed her to live and work in her gym, under the circumstances that she sobered up. Trainer then lived here for the next couple years, keeping her promise. She had a small summer romance with a tourist named Villager. The young man and woman were deeply in love with each other, but Villager had received a call announcing his election as mayor in some unknown town, which later turned out to be a lie. Oblivious to the lie though, Villager had packed up and left town the following day, leaving Wii Fit Trainer heartbroken once again.

A few days afterwards, Wii Fit Trainer had walked into the gym where she found a letter waiting for her next to a yoga mat. The letter was a personal invite by Masahiro Sakurai to be a playable character in the next installment of Super Smash Brothers. The letter went on to explain that she was recommended by another invitee, Villager, who felt remorse for leaving Wii Fit Trainer behind. It also said they had free breakfast, warm blankets, and average pay. Despite knowing about the series, Wii Fit Trainer decidede to join the series to rejoin her lover and get them bands.

Similar to the Villager, the Wii Fit Trainer was pictured as a killer after her reveal, probably due to her attacking other fighters while doing yoga. But her killing memes didn't go as far as the Villager's due to lack of sharp weapons. 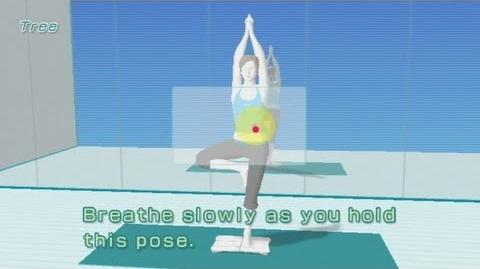